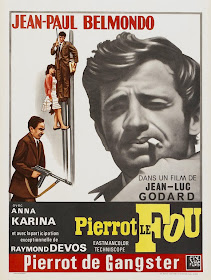 I feel alive and that's all that matters.

In many respects, writing about Pierrot le fou is quite a fool's errand, for me anyway. It's one of those movies so pivotal in leading me to start this blog back in 2008 that it's ever since spurred an overload of thoughts I have to express about it. I bought the original Criterion DVD shortly after it was issued, pushed to the top of my acquisition list back in those days simply on the reputation it had earned. I had no prior knowledge of the film at the time, but the subject matter and the enthusiasm surrounding the announcement of its pending release definitely stirred my interest.

When I finally got a chance to watch Pierrot le fou in the late summer of 2008, Jean-Luc Godard's eye-popping widescreen follow-up to Alphaville easily met and surpassed my expectations with a message and delivery that profoundly connected with where I was at in my own life at the time. Ever since then, several of the film's iconic scenes and images have lingered in my imagination, serving as both an alluring vision of an energized creative life led according to impulse and a cautionary tale about the risks associated with foolishly severing the ties that bind us to hearth, home and predictable routines. Both the appeal and the warning of Pierrot le fou continue to resonate with me, pulling and prodding my conscience in conflicting directions even if I take a year or more in between viewings. The end result is a surfeit of opinions on the film that would threaten to congest a conventional written review, and require numerous hours to adequately record via my keyboard. So in order to work my way around that dilemma, I've decided to do something different, slightly commemorative even, to mark its entry into this series.

My intention is to host a Google+ Hangout on the evening of Tuesday, April 1, 2014 (April Fou's Day), so that I and anyone who cares to join me can spend an hour or two verbalizing our thoughts on the movie. Then I will post the document of that event, however it turns out, here on my blog, so that readers (and listeners) can avail themselves of the conversation if they so choose. To me, that seems like a more fittingly spontaneous framework for discussing the movie, since so much of Pierrot le fou comes across as semi-improvised... if not immediately on the spot while the cameras were running, then at least put into script form just a day or so before the actors were given their lines and a brief interval of time to rehearse the scene. Trust me, I have lots to say about the film... whatever doesn't come out in the chat session will be summarized here in some kind of write-up or another. This is a movie that I have been mulling over for years and I won't let it go and move on to the next thing until I've dealt with it thoroughly.

In the meantime, here's a trailer to serve as a tune-up or enticement to connect with me before the G+ Hangout takes place:


OK... my adrenaline is still pumpin' a bit... my friend Mark Hurne and I just finished a one-hour conversation about Pierrot le fou on Google + and here's what we had to say:


For now, I'll let this video speak for me, but I may have more to say about this film later... my enjoyment of Pierrot le fou is nearly inexhaustible!


Next: Sword of the Beast
David Blakeslee at 7:31 PM
Share