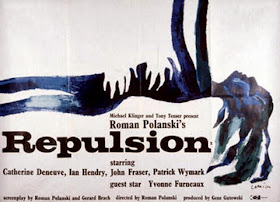 There's somebody there. I can see your shadow... If you don't open the door, I'll bloody well break it down!

My first encounter with Repulsion was well over three decades ago. I don't have the clearest memory of the experience, given the circumstances of the viewing. It was at some kind of a house party that took place either in San Francisco or perhaps Berkeley, around 1980 or '81. At some point in the evening, after multiple rounds of substances had been ingested by me and my fellow celebrants, our host had access to what I assume to have been a 16mm print of the film that was loaded up into a portable projector, using a blank living room wall as the screen. I had no knowledge of the movie, but I did remember hearing about Roman Polanski as a kid, when his name was used as a lyric in the song "Manchester England" in the American Tribal Love-Rock Musical better known as Hair. And I'm pretty sure that I knew back then that he had directed a film titled Rosemary's Baby which I hadn't yet seen at that time (the pre-VHS era, I'll remind you) but understood to be a "devil's child" movie from its reputation as a precursor to The Exorcist, The Omen and of course the target of Mad Magazine's parody version, "Rosemary's Boo-boo."

So without much further preparation than that vague background knowledge and the semi-hallucinatory state that I happened to be in at the time, Repulsion flickered through the haze of that early punk rock era social gathering and proceeded to burn its most nightmarish images into my head - the hideous skinned rabbit, steadily decomposing over the course of several days; the tiny cracks in the wall of Carol's apartment suddenly bursting and erupting into chasms that felt as raw and threatening as the very gateway into Hell itself; the clutching, groping hands that sprang out of the walls of that dim, haunted corridor to grab that poor girl's body as she tried to make her way from one end of the passageway to the other; and most hauntingly, her vacant, glassy-eyed stare as she fended off the advances, at first by mere physical and emotional withdrawal and later, through the brutal resistance of a slashing straight-edge razor, of men who found her too attractive and vulnerable to resist approaching for sexual favors that she had no interest in providing. Even though my comprehension of the overall "message" of the film was unavoidably compromised due to the limitations of that setting and my general lack of readiness to take it in, watching Repulsion just that way seems to be about as ideal of an introduction to Polanski's second feature film (his follow-up to the equally sensational, memorable and emotionally evocative Knife in the Water) as any that I could imagine.

That would include the now-unattainable opportunity to see the film as something entirely new, fresh and unanticipated, since Repulsion has gone on to become something close to a template for all the subsequent psychotic slasher flicks that have been produced over the last five decades: an enigmatic figure, presumably abused and corrupted by some series of traumatic experiences, is transformed by that ordeal to become a lethal and horrific killer that lashes out in fury in response either to threat or, more frighteningly, the simple opportunity to wreak havoc on a victim because there's nobody else around who can stop the carnage. Reading Bosley Crowther's review in the New York Times from the film's initial release gives a vivid approximation of just how big of a jolt Repulsion delivered to its first wave of viewers. The venerable critic can barely contain his enthusiasm and excitement in response to the unfamiliar combination of elements:


Which brings me back to that first experience I had in watching this film, in the company of a bunch of psychologically alienated, emotionally displaced and extremely skeptical young adults at the beginning of the 1980s, most of whom had serious reservations about the society they were being asked to assimilate into. That is, after all, why we had coalesced around this alternative punk/new wave scene rather than take the more conventional routes presented to us at the time. To this day, Repulsion functions best (in my opinion) as a harbinger of youth in rebellion, a voice of protest emerging from those who find themselves irreconcilably weirded-out by the concessions that mainstream sensibilities would require of them to be included in the flow of what the establishment has to offer. Whether it was back in the mid-1960s, as the emerging generation of Baby Boomers were just beginning to complete their second decade of life, in the early 1980s as the first wave of Gen Xers were grappling with the broken promises of their own upbringing, or as today's Millennial generation is coming to grips with the illusions thrust upon it by those helicoptering parents who provided lots of external protection while depriving them of a clear path toward autonomy and self-sufficiency, a film like Repulsion speaks meaningfully to that sense of being ill-prepared to face one's future and feeling betrayed by those who had been entrusted to clear that path.

Carol's descent into madness and irrational violence is hard to fully understand and impossible to justify... but many of us can still (and easily) find a way to empathize with her on some level, as disturbing as that thought may be. Even if it's just a cry for some kind of companionship when we are feeling shaky, alone and abandoned... invaded and oppressed by unsolicited advances... rushed along toward some ambiguous condition of "maturity" that requires us to take part in activities that intrude upon our sense of self, before we are ready to launch into that next self-sacrificial stage of personal development... Carol's plight - as crazed and murderous and ferocious as it is - is not all that different in its emotional components from what we ourselves (or, for those of us who can identify, our kids) have felt in our crazy counter-reactions to the insanity of the world we've been shoved into.

As seen in the clip above, Repulsion's schlocky, exploitative marketing circa 1965 is at once unsurprisingly predictable for its era, while simultaneously, sadly cheap and unfortunate. I suppose that, to the extent such a campaign got the word out and generated some curiosity about the film, it served a purpose, even though by now it functions more as a slightly amusing relic of how such a transgressive innovation in cinema had to be sold in order to secure its audience. Another angle of approach, one that focuses on the emergence of Roman Polanski as a sexy and provocative young director in the international cinema scene, is offered as one of the supplemental features in the Criterion edition of the film, via a 1964 short documentary produced for French television that shows several scenes from Repulsion being rehearsed and shot. In it, we get to hear from Polanski, already coming across as a vibrant and intriguing celebrity figure, all vigorous and brilliant in his tight fitted t-shirt and articulate insights into the motivations of each of his characters. We also meet his leading female actors Catherine Deneuve and Yvonne Furneaux as they step out of character and share their impressions from the time in which the film was made. It's a wonderful bonus clip to include here as it nudges us to look deeper than just the surface level of shock images and the voice that Carol's disturbed behavior gives to whatever repressions we ourselves seek to work through in the process of internalizing this film. This thoughtful and expertly-crafted video essay (hosted on Vimeo, thus not embedded here) by Kim Morgan , and edited by Matt Zoller Seitz, provides additional commentary that, in my opinion, backs up what I've written here, even though I just discovered it in the final phase of composing this essay. :)