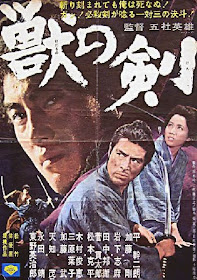 To hell with name and pride... I'll run and never stop.

Sword of the Beast is the first of four films Criterion released in the Rebel Samurai box set back in 2005. The movies themselves were originally released in the mid-1960s, when the chanbara (sword fighting) genre was at a commercial peak in popular Japanese cinema. In this set, the titles are related not by a common director but by a conceptual theme, the first Criterion box set to take that approach, and not one they've utilized too frequently afterward. There's the Great Adaptations box compiling films based on famous works of English literature, but that was put together after the fact using four DVDs that were originally intended as individual releases. Monsters and Madmen features different directors, all employed by the Gordon brothers who produced the four low-budget drive-in schlockfests included therein. Likewise, the America Lost and Found collection emphasizes the output of a particular studio, while the Paul Robeson set focuses on the work of its titular subject, rather than the people behind the camera. The mammoth Zatoichi omnibus gathered together the full run of a long-lasting movie franchise based on a single character. And the globe-spanning, eclectic and diverse content of last year's World Cinema Project (Volume 1) blockbuster was largely driven and decided by the editorial discretion of Martin Scorcese. In all this, the Rebel Samurai quartet, with its nearly bare-bones presentation, except for the inclusion of a few very brief supplements, and the curious lack of a dedicated spine number for the box itself, could be considered a forerunner of the Eclipse Series that debuted a couple years later.

So the thematic principle that unifies Rebel Samurai - that of courageous but morally conflicted swordsmen in fundamental conflict with the strict application of bushido that in most instances would require them to self-destruct due to offenses they've committed - spoke powerfully to movie audiences in Japan in the mid-1960s. As the liner notes point out, that nation was going through its own version of the cultural upheavals that seemed endemic to that troubled and transformative decade, and these stories seem to have provided an entertaining way to engage viewers and give vent to some of the frustrations they were feeling about the exploitative circumstances they were dealing with in their own lives. The four films in this set are just a sampling of the popular fare that fans apparently couldn't get enough of. The Zatoichi series referenced earlier was also at its peak around this time, releasing two or three new installments per year after bursting onto the scene in 1962. In fact, the next film I'll be reviewing here, Zatoichi and the Doomed Man, was issued on the very same day that Sword of the Beast made its debut, according to IMDb. Studios apparently had little concern about over-saturating the market with jidaigeki offerings in a decidedly badass vein.


While the trailer above pushes the film's brawnier, beastlier moments right up in our face, there's more to enjoy here than simply the sheer physicality of Mikijiro Hira's fighting skills. True, his wildly athletic prowess, full of wild leaps, crazed grimaces and savagely flailing thrusts of his sword, give him a distinctive style that creates a welcome contrast to the more classical manner of restraint and efficiency we see from stars like Toshiro Mifune (Yojimbo) and Shintaro Katsu (Zatoichi). Those performers, both around a decade older than Hira, are plenty muscular enough, of course, but Hira brings an uninhibited wildness to the role that director Hideo Gosha employs masterfully in making his protagonist, the outlaw ronin Gennosuke, a distinctive and memorable character as he pursues his mission of vengeance and survival. Gosha and Hira worked together previously, in Gosha's feature debut Three Outlaw Samurai, based on a television series of the same name that they also collaborated on.

For first time viewers of Sword of the Beast, it may be helpful to read a brief introductory summary of the plot, so I'll provide it here without giving too much away. It's a fairly complex narrative, especially for a film that runs less than 90 minutes, and my first viewing led to a bit of confusion as to who was chasing who, so here's a friendly guide to get you started:

The action takes place in 1857, toward the end of the Tokugawa era, when the samurai tradition was about to become completely untenable due to Japan's grudging opening to the West and the inevitable tides that eventually sweep all prevailing orthodoxies into history's dustbin sooner or later. Gennosuke is a foot soldier who participated in a plot to assassinate a government official (referred to as a counselor) in order to pursue a reformist agenda. Now a wanted outlaw, he is pursued by the counselor's daughter Misa, her fiance Daizaburo, the master swordsman Tanji and a few hired hands brought along as an extra measure of guarantee that they will find and kill their target. Gennosuke, though of lowly birth, is respected as a highly skilled swordsman, able to defend himself and prevail even when badly outnumbered.

Gennosuke's route of escape leads the chase to a mountain that's claimed as property of the Shogun. Ordinary mountains are of little worldly interest most of the time, but this particular mountain has a river running through it in which gold has been discovered, and that creates a whole lot of intrigue. Doing their best to lay low in a supposedly abandoned shack on the rivers edge is a husband and wife, Yamane and Taka, who have been diligently poaching the shogun's treasure, in obedience to the dictates of their clan lord who has commissioned them to commit this thievery in the hopes that their work and loyalty will improve their station in life. Along the way, Gennosuke is befriended by a comically ambitious farmer who dreams of finding his fortune glinting at him from the bottom of a prospecter's pan, and manages to offend a trio of lowlife thugs who then proceed to skulk around, watching and waiting from the bushes to see what kind of mischief and menace they can inflict on anyone who steps across their path.

As the story proceeds, we meet various competing interests, all of whom seem to be driven by the most venal of motives, all befriending and ingratiating on the surface only to turn violently aggressive when it comes time to get down to business. The bottom line to all this seems to be that offers of friendship and allegiance, promises of loyalty and advancement, invitations to enjoy the pleasures of eros and material wealth, are all to be viewed with relentless skepticism, because we really don't know what kind of danger lurks behind these seemingly welcome opportunities. The intentions of the heart, and the priorities that guide our actions from the deepest recesses of our psyches, remain impenetrable mysteries, rendering us all untrustworthy allies when the moment of truth and reckoning arrives. As Gennosuke declares when he masterfully sidesteps a showdown with his rival that would have been premature if it had erupted into mortal combat at that moment, "this wolf has sharp teeth." And to survive in this era of corruption and hypocrisy, those teeth, like the Sword of the Beast itself, need to retain their cutting edge, and occasionally be bared as a warning to any who might otherwise lapse into self-defeating and apathetic complacency.


Next: Zatoichi and the Doomed Man
David Blakeslee at 2:00 PM
Share