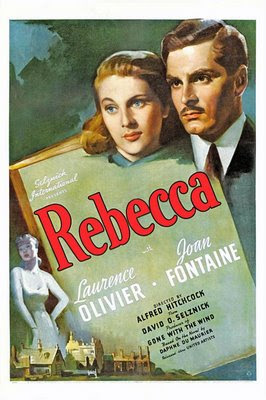 "She knew everyone that mattered. Everyone loved her."

My series now reaches the pivotal year 1940 and the world has changed. Another great war has broken out in Europe and many of the leading artists and intellectuals from the continent and England have decided for various reasons to make their way to the United States, where isolationist tendencies and geographic remoteness offer relief from the dangers, oppressions and limited resources of their home countries. Among these expatriates is one Alfred Hitchcock, whose move to the USA might have been inevitable anyway even without the threat of war. His stock had been rising in the British film industry, with films like The 39 Steps and The Lady Vanishes demonstrating his technical skill and storytelling flair. Already known for his commanding personality, Hitch's first assignment in the states was suitably audacious - he had contracted with Hollywood mogul David O. Selznick to direct the producer's follow-up to Gone With The Wind, the biggest, most lucrative and sensational epic of recent years, or maybe ever up that point in cinematic history. Pretty tall order! I think the consensus is that the Selznick/Hitchcock team did pretty well for themselves here: Rebecca won an Academy Award for Best Picture in 1940 and a star-making launch for the two leads, Joan Fontaine and Laurence Olivier, not to mention great commercial and critical success. But let's learn a little more about the film and the elements that came together to make it so popular in its time, and so highly regarded even today.

Rebecca is based on a popular novel by Daphne Du Maurier, a woman whose work I have never read or even seriously considered picking up (just being honest, no disrespect intended!) Her books were extremely popular throughout the 20th century and go a long way to accounting for the top-level production values and rigorous talent search applied to the project. Sharing some common traits with Jane Eyre, Du Maurier's books primarily appealed to women but not exclusively so. She pushed back against being categorized as a "romance novelist," and can fairly be likened to the Bronte sisters in her literary achievements, from what I've read. Somewhat like contemporary adaptations of The Da Vinci Code and just-about-to-be-released Angels and Demons, widespread cultural familiarity with the story created a lot of pre-release interest, a huge audience and a terrible potential for backlash if the film failed to meet a range of high expectations.
The DVD package that accompanies this feature film provides as good of a one-stop opportunity for inn-depth study of a film's creation as could be hoped for. The second disc of this now out-of-print (and highly coveted) set is richly loaded with behind the scenes materials including screen tests of many Hollywood stars who tried out for the female lead role, correspondence between producer Selznick and director Hitchcock, and other artifacts that give vivid insight for how motion pictures were created in those days. An excellent commentary track also draws our attention to numerous artistic touches employed by Hitchcock as well as insight on how some crucial scenes from the book had to be adapted to fit into the Hollywood production code (i.e. censorship), homogenizing the novel's provocative psychological and erotic implications into acceptably moralistic scenarios. Despite those limitations, Hitchcock and crew found numerous ways for Du Maurier's gothic sensationalism to come through and connect with their audience, to suitably engaging and creepy effect.

Though the sets, techniques, performances and cinematography are all impressively proficient, they are not beyond critique. Any production involving egos as outsized as Hitchcock's and Selznick's requires concessions that will fail to satisfy at some point when the final product rolls out. Later in life, Hitchcock distanced himself from the film a bit due to its lack of humor and the way his hand was forced by Selznick to rigidly adhere to the source material much more closely than Hitchcock ever had to before or after in his long, illustrious career. This film, for all its accomplishments and gaudy sophistication, was something of an apprenticeship for Hitchcock in how to work within the confines of the Hollywood system. Fortunately for him (and us) this venture turned out so successfully that he was able to gain an unusual degree of independence and control over his films as the years rolled by.

So enough for now about "the making of..." Rebecca's staying power and enduring fascination rests, I think, in its nearly archetypal portrayal of the experience that many women have in marriage - of course, casting the process in larger-than-life proportions in order to drive its points home all the more vividly (something that happens a lot in the movies, you know.) As with the book, the female lead in this film is never given a name - her character in the screen credits is listed as "I." Her voice narrates the opening scene, a slow approach through a shady winding drive to the ruins of a large English country estate - "Manderley." Comparisons could be made to the opening of Citizen Kane, made a few years later, though Kane's opening sequence is much more ambitious. Having established that she could never go back to Manderley again, we jump backwards in time as we proceed to learn just what happened to reduce the once-magnificent house to ruins. Surging waves pound against the base of rugged cliffs, the camera pans up and reveals the dark silhouette of a man who appears poised to jump off the precipice into the ocean below. A woman's voice cries out and breaks him away from the spell. This chance meeting of two strangers in a breathtakingly dangerous and romantic locale, of course, introduces us to the main characters, destined for love, or at least an enhanced degree of shared emotional complication.

Here we see them becoming more familiar with each other, after their first "civilized" encounter in a hotel in Monte Carlo. He is Maxim de Winter, born into aristocracy, heir to Manderley and a widower of one year. "She" is a paid companion to a wealthy and snobbish American woman on holiday in Europe. This scene establishes "her" insecurity about herself and her vulnerability to seduction. Look carefully for all the cues that de Winter (played by Laurence Olivier) delivers establishing the character played by Joan Fontaine as a needy, dependent woman-child:

The end of that scene is, of course, ominous foreshadowing of a terrible secret that will eventually be revealed, and I'll do my best to respect the no-spoilers rule here. From this point, the couple experience a "whirlwind romance" that leads, perhaps implausibly but also captivatingly, to him taking her for his new wife, the second Mrs. de Winter.

They return then to Manderley, which from the outside has the look of "every girl's dream home" but turns out to be rather overwhelming and intimidating for a woman born to common aspirations and unprepared to be the lady of such a great house. Further complications set in when Maxim turns out to be more distant and tormented a soul than she would hope for in a new husband, and especially as she learns more about the attributes of the first Mrs. de Winter, named Rebecca of course.

Rebecca serves as the epitome of "previous other women" that a wife's husband has been involved with - brilliant, witty, beautiful, impeccably mannered, utterly at ease in all circumstances and in control of herself and those around her. Joan Fontaine does a very impressive job conveying a sense of nervous inadequacy and uncertainty about how she will ever be able to live up to the lofty standard set by her predecessor. Her anxiety is not so much based on competitiveness with the ghost of Rebecca, but rather in her concern that Maxim will soon (if not already) find her boring, shallow, incapable... unloveable.

And then there are the tensions with Mrs. Danvers, the domineering servant whose devotion to Rebecca and chilly contempt for the new Mrs. de Winter ramps up the weirdness and morbidity to levels we normally associate with a Hitchcock film. The two women create some powerfully disturbing scenes with all sorts of that are best viewed in context to be fully appreciated. So I won't paste any of their clips in here, but to give you a better sense of the film's cultural impact a few years after it was released, here's a trailer that you might enjoy (I love this style of pitching movies to an audience much better than how its done today - more earnest, I guess.):

I watched this film with my wife last evening - it was literally a dark and stormy night! The perfect conditions for watching a movie like this one, with several very well-timed lightning flashes and thunder rumbles. It also helps that she's quite a bit "jumpier" than I am when watching thrillers - it adds so much to the fun! But more than the thrills of unpredictable entrances and plot twists, Rebecca has a lot to say about the pressures that come to bear on marriages, especially those in which the terms of the agreement are strained and stressed by disappointment, betrayal, mistrust and vindictiveness - in other words, all couplings that manage to last longer than the indefinably brief period we call the "honeymoon." Over the course of the film, we see the new Mrs. de Winter toughen up to meet her challenges. She becomes more assertive, survives relational, legal and criminal disasters, even dresses better! The prospects for her marriage relationship to Maxim remain highly ambiguous at movie's end. For having endured the hardships placed before her, "she" remains married to a self-absorbed, emotionally stunted, prone-to-anger aristocrat who has a hard time returning the love that she longs to show him. The ending remains unresolved in the film; in the novel, the narrator speaks from some place of foreign exile - though there are elements of a Cinderella story to be found in Rebecca, there's no guarantee of a "happily ever after..."

Next: The Proud Valley
David Blakeslee at 10:38 AM
Share