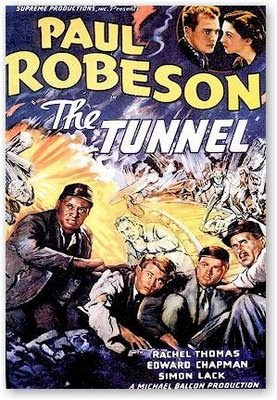 So what is it about Paul Robeson movies being released under different titles than they were originally intended to be named? The last film of his I featured here, Jericho, was distributed in the USA as Dark Sands. And now we have The Proud Valley, and the only decent posters I could find on-line were from non-British editions, like <--- this one, where The Proud Valley became (lamely, imo) "The Tunnel." But I do like the poster, all intense and dramatic as it is...


As diligent readers of this blog know, Paul Robeson was a major cultural figure of his times, probably the pre-eminent African-American film star of his day, which sadly wasn't saying much in terms of box-office clout, critical respect or (most importantly) ability to command strong lead actor roles. Early on in his career, even before sound had been introduced into the movies, he'd had to go overseas from his native USA to escape the perils and restrictions placed upon him by segregation. This is the sixth film of his that I've covered here, all of them coming from the impressive Paul Robeson: Portraits of the Artist box set that Criterion released a couple of years ago. All but the first film were shot overseas, even though he did do one Hollywood film (Showboat) in 1936. Though he enjoyed the relative openness and freedom he found within the British studio system, his cinematic career continued to be plagued by the limited range of stereotypical roles written for Negro characters. He did his best to bring dignity and strength to each performance, but sheer force of will could only go so far when the script pushed him into subservient or simple-minded postures.
So here we have what Robeson went on to describe as his favorite performance, a role where he was able to portray a black working man "as he is," without being overly burdened by what some white screenwriters thought that their prospective audiences expected a black man to behave on screen. The plot of The Proud Valley is somewhat conventional (a group of hard-pressed coal miners risk their lives to earn a living and one of them makes a noble sacrifice that allows his fellow miners to survive when danger strikes) but the pivotal moment is set up in a roundabout way.

Robeson plays David Goliath, an American drifter who jumps ship in Cardiff, Wales and wanders his way deeper into the British coal country, specifically the village of Blaendy. He arrives there via train where he learns from another rail-rider that another black man had preceded him and found work in the mines. Looking to make money by singing for handouts in the street, his famously rich baritone catches the attention of a local choir leader who enlists him to sing with their group in preparation for an upcoming vocal competition. Apparently the Welsh were very serious about their singing in those days, and it seems to be a familiar trait of their culture, going by the way that vocal music is handled in the film. Numerous scenes of crowds harmonizing and even gritty-faced miners bursting into song are portrayed naturalistically - there's enough singing in the film for it almost to be considered a musical but viewers are left with the impression that this is just what Welsh people do.
So once Robeson settles in with his newfound benefactors, we get to enjoy what I consider an entertaining and somewhat eye-opening view of an easily-overlooked segment of British society. I've seen a few English films so far here but none that deal with Wales - so I was fascinated to see the sights and hear the slang of a foreign subculture whose language I happened to understand.
The narrative is pretty straightforward. Robeson takes up lodge in the house of his benefactors, parents of five children, only two of whom have speaking parts. Emlyn, a young man, is just coming into his own and wants to get married, but his plans are set back when a mine accident leads to its closing and the loss of his job. His younger sister Dilys nicely performs the part of the cute, sassy little sister and provides a generous share of the laughs to be found in the film. What strikes me is how easily Robeson's character David is accepted into the village society (though not without some pointed resistance from a few of the locals.) I can easily see why Robeson preferred this role to the others - it was realistic in showing some of the prejudice that a dark skinned man had to deal with in that time but didn't press him into absurdities as a result. More than any other film of his I've seen yet (except perhaps Borderline), he was regarded on screen as simply a man, one capable of making mature, independent choices, with practically no undercurrent of sexual innuendo or "native savagery."
Two other significant themes stood out to me - one, the plight of the workers, and the other, the role that the coal industry played (and the film industry, for that matter) in mobilizing the populace for war. The earlier portions of the film offered an effective portrayal of the grim conditions that coal miners had to work through. I haven't watched a lot of "mining disaster" films but when I do, it really stuns me to consider what these people have to go through to grind out their living. Robeson, by this point in his life an avowed socialist, might have pushed the film toward a more didactic argument on behalf of laborer's rights - there is a pivotal confrontation with "the bosses" at one point - but the filmmakers let the class consciousness speak for itself rather than bombard the audience with a preachier message. Still, it's hard to not feel moved by the tough conditions that generations of Welsh miners had to endure.
Later in the film, the imminence of war with Germany comes clearly into focus as a series of headlines spell out in sequence the negotiated compromises and reneged promises that led to war, culiminating in Germany's invasion of Poland just months before the film was released. That sequence conveyed the compelling immediacy of a newsreel from the time and I couldn't help but contemplate how fresh and riveting those events had to be for contemporary audiences. 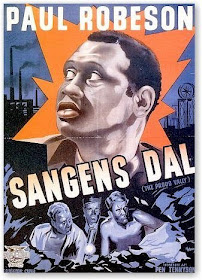 The Welsh miners, many of whom were probably not considered worthwhile recruits for the UK military, nevertheless saw digging up coal as their form of national service. A clear subtext of supporting the war effort against fascism came through to me, with one of the lead characters going so far as to exclaim loudly and unambiguously, "To hell with Hitler!"
As with the other celluloid works of Paul Robeson, we're not witnessing the epitome of classic cinema. But hey, after reviewing major works by John Ford, Jean Renoir and Alfred Hitchcock over the past week or so, I'm happy to set the bar a bit lower anyway! Robeson the performer offers us a chance to reflect and admire the achievements of a cultural pioneer and a great-hearted soul who basically bowed out of films just a few years later, turning his attention and powerful gifts in other directions. There's one more film of his we'll be looking at, from 1942, Native Land.
I wasn't able to find any video clips from the film itself, but as I did in my review of Jericho, I can at least provide some music from the film! Here's Robeson's very moving performance of Deep River, a gospel standard that he sings solo on this track, and with choral backing in the film version:
Next: The Bank Dick
David Blakeslee at 10:32 PM
Share